A while ago, I set out to write 2 articles a week, for the rest of my life.

That lasted about 2 months.

Alas, the week before the writing of this article I missed a deadline. It was writer’s block, it was shiny object syndrome (I bought a camera), it was distractions (day-job work was hella busy)…. it was all those other excuses I can come up with, if I’m being imaginative enough.

Nonetheless, I failed to do what I’ve committed to doing. Not a good feeling.

What does it mean about me? Am I cut out for this shit?

No matter how naturally disciplined you are, It’s not long before you’re back to being pushed and pulled by your basic-ness.

You see, what’s real is pain, laziness, resentment, hunger and desire – not your lofty aspirations.

Thankfully, we’ve managed to create mechanical inventions that can be 100% reliable when we need them to be. Imagine if the brakes on your car only worked 79% of time?

I wonder how many people would skydive if the shoot opened 60% of the time.

Indeed, for us puny humans, any goal we set for ourselves, especially when we have lofty aims, is doomed to the experience of failure.

We will miss the shot sometimes – shit happens – and it’s how we react which will determine if that failure stops us in our tracks.

Failure is Not Really Failure

While it’s true that we will inevitably fail to stay disciplined in our goals, it doesn’t mean we need to be defined by those individual failures. In the grand scheme, big picture perspective, because we are setting goals, we already are more successful than if we aren’t.

On the journey to greater success, we mustn’t focus on the micro situations too much. Life inevitably gets you, but if it doesn’t get you down-and-out, you’re still far ahead of where you were.

While, certainly, it doesn’t feel like this when we are faced with the crushing realization that we’ve missed a deadline, or a work-out, or messed up at work.

At that moment, it may feel like we’ll never make it.

We might be crushed with doubt, disappointment, and anger. At that moment, our brain will bring up all the reasons why we can’t succeed. We will dwell on the past.

But that’s only an illusion… 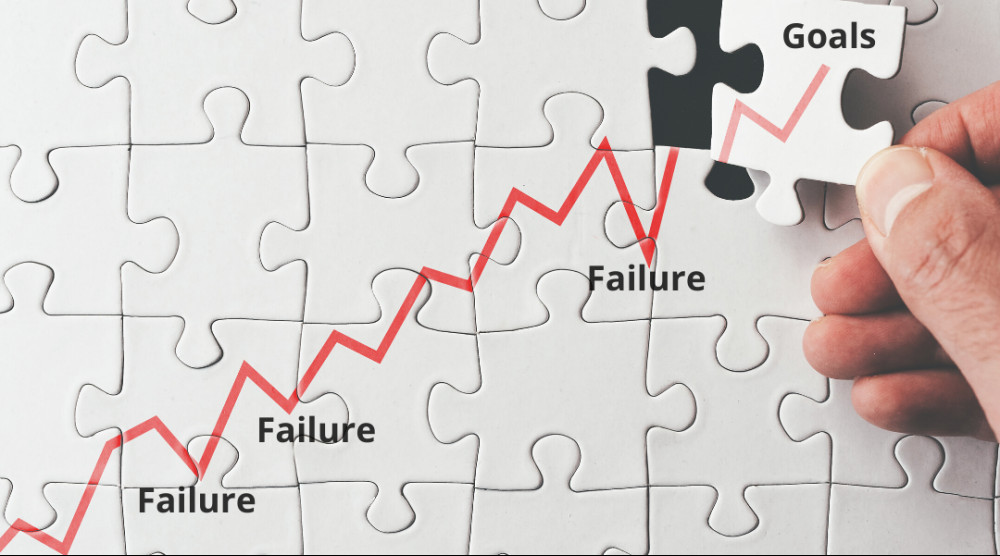 When we set extravagant goals for our self – when we have an amazing vision for our lives, we can’t help but already be lifted to a overall higher ideal. Our failure may as well be success if it were put into the perspective of someone who is sitting on his ass all day, whining and complaining.

Upon failure, overcome with negative emotions, we lose perspective and we might forget how far we’ve come.

In missing a deadline, I might have forgotten that I spent 8 weeks writing consistently. That’s quite a long time.

Therefore, we must look upon failure as a once-in-a-while occurrence, not something that should dictate our overall emotional well-being.

By picking ourselves up again – as soon as possible – we overcome failures… and succeed anyway.

Reflective practices will prevent failure from debilitating us. They’ll allow us to pick ourselves up. The key is to develop a productive practice when reflecting on your failures.

Most people get defeated by failure because they simply don’t reflect upon them properly. Here’s a couple types of bad practices:

A perfectionist is someone who over-reflects on his failures and lets it humiliate him.

He thinks of all the possibilities of failure, all the past-failures, and how to mitigate them. In doing so, he fails to even take action. In trying to do everything 100%, which is impossible, he ends up doing nothing.

When faced with failure, people that are more emotional and analytical tend to learn towards this “practice”…

On the other hand, there is reckless Rick, who dives into everything, and ends up repeating the same failures over and over again. He has focused too much on the doing, and with a mentality that he can just bull-doze through failure, he fails to see what he needs to correct before going out and doing again.

Both of these reflective practices can be learned from – if only we take the more moderate versions of each and turn it into something resembling wisdom.

Depending on which end of the spectrum we’re starting from, we can greatly benefit from moving towards the other direction.

Someone who is a perfectionist can overcome failure by forcing herself to just do more.

In the brute force effort of just getting up and going again – without the over-thinking part – a perfectionist can be defiant against failure.

Additionally, the meditation on upward trends, as soon on the graph above, can be encouraging. The wisdom of this message will help her grit her teeth, relish in discomfort, and work despite it.

So for an over-thinker, “Keep going – stop thinking.”

As for someone who is more hard-headed, it’s wise to take failure as a sign for the needed rest, and the making of painful adjustments to how things are done.

Perhaps, it’s painful to admit mistakes, and the natural tendency is to just ignore them and just try again. Perhaps, one has grown comfortable with yes-men in their life, and the realities of failure can kept nicely hidden from him.

Failure is painful and shocking sometimes, and the knee-jerk reaction could be aggression. But then, we fail to learn from it.

In doing so, we ruin that upward trend by actively going in the downward direction – all while believing that it’s actually productive towards the upward trend. It’s more difficult to turn down the action than it is to turn it up because it requires killing the ego. Giving it a nasty, painful, death.

Nonetheless, for an over-doer, “Time to think before you act. Time to change”

If you want to overcome the crushing forces of failure, it’s important to always keep your eye on the big picture. How do you emotionally react to failure? What kind of adjustments do you need to make?

When we begin to put things in the right perspective, the immediacy of a recent failure can’t hurt us.

When we realize that all the negative emotions – the doubts, the frustration, the anger – are not an indication of long-term overall success, we will become resilient.

Not immune to failure – even allowing it – but never letting it stop us from growing.