Your behaviors determine your destiny.

Take a top-down look at yourself, as if you are a scientist studying an animal in captivity, and you’ll realize that daily-life is simply just a set of your unique routinized behaviors.

These behaviors serve a million purposes. They can be useful or they can be destructive. They’re rational or irrational. They’re oftentimes unstoppable.

Every person behaves in a certain way. In communication behaviors, one expresses energy and is direct with his tone of voice while another person may be stifled and unsure of himself.

One person reacts to a smile by opening himself up and engaging, while another person will try to run away. And so on, in a million nuances, we act and react.

Ultimately, behaviors will bear results, and will form our destiny. Destiny, being what is happening to us and what other people think of us.

In the personal growth space, we can look at ourselves as behavior-developers. We know that the fruition of our lofty goals is only achieved by deep roots called good behavior.

And so we feel the need to have our set of routinized behaviors developed. They’re not good enough to get us the results we deserve. 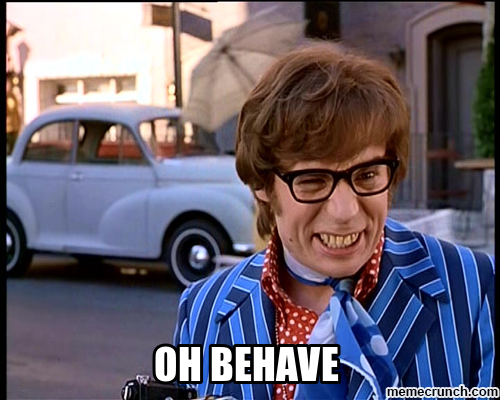 How do we develop behavior, though?

Along the difficult journey of doing this, we may doubt that it’s even possible. Indeed, a lot of us have a long way to go. You’ll quickly learn that repeated behaviors are very difficult to stop doing. Your brain wants to do what is comfortable and safe, not what is optimal to your personal growth.

Think of your daily habits are well worn-in pathways – ruts that you can easily slide into and follow.

It is always going to be a battle to get out of these ruts and progress will be hard to come by.

Knowing this, it’ll help us to explore why destructive, unproductive behaviors even exist.

To change behavior, we have to understand why we always seem to want to do what we’ve always wanted to do, and overcome those impulses.

Life is full of experiences of injustice, pain and suffering, malevolence, and just bad luck.

Accept it or not, you’re in this modulated duality experience of really good times and really shit times. Nobody escapes experiences in these dualities – nobody gets out unscathed.

Inevitably, you’ll be hurting. You might even get traumatized. All this pain will make you cope. Some people get tough as shit, while some people become apathetic and whiney. You might be somewhere in between that.

Some people are in a constant “flinch” mode. They irrationally avert contact with so many things. They can’t make eye contact with apparently kind people. They feel nervous even though they are among allies.

Whatever behaviors come out of getting hurt are usually set in place as a precationary measure. If something very crappy happened in the past then it will likely happen again. It’s true. It makes sense.

Nature doesn’t play games, and it will rather be safe than sorry. It will go through your gambit of routinized behavior and choose the one that it had to choose before. It does this by making any outside behavior very uncomfortable, even painful, to do.

Indeed, aversion is very useful when you’re around hostile environments. It may actually be the key to survival during a phase of your life. But now having experienced hostility, even the slightest hint of it will make your body default into aversion.

Your rationalizations will help root this behavior. Stories will be created.

Even if it’s not rational, which it often isn’t, you will twist a story so that it fits the narrative of what you have always done before. Some people call this destiny.

Not you, you are deciding to work on it.

Then, one day, maybe you can live like you have some sort of “control” over your behaviors. Maybe behaviors are only destined to happen if you let them.

Aside from being spiritually empowering, this perspective is far more useful than the alternative.

Rationalizations are the stories you tell yourself as you do your daily routinized behaviors.

Every behavior has a story. It could be as simple as, “I felt hungry so got up and went to the fridge to get an apple.”

They get more complex and emotionally charged when it comes to behaviors that have to do with business, love, and war.

The main emotional drivers of every story are power, sex, and violence.

Indeed, when we have commitment issues, hidden resentments, and shame we might behave in very irrational ways. Additionally, we’ll create amazingly, crazy as shit, elaborate stories so they can continue.

Resentful and frustrated, some may blame the whole socioeconomic system so that they can continue to live out their petty behaviors.

They will neglect difficult tasks and be righteous instead. In reality, they should be ashamed and seeking retribution.

One can’t be righteous and feel the need to take part in the painfully useful behavior of strict pull-ups. The behaviors that produce fruitful results can only come from a hero’s story. The emotional context of the story is of humbleness and servitude.

Righteousness doesn’t motivate discipline. It only creates pride and greed. In order to truly improve your life, you will have to grit your teeth and face the painful reality of your ineptitude.

This means, no more rationalizations.